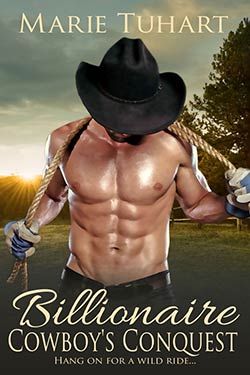 Sidelined from his rodeo career by an injury, billionaire Texas rancher Tyler Knight returns to home to find the staff overworked and the office a mess. He hates paperwork, so he's pleased to hear his sister has hired an office manager. But when he finds out it's Jessica Sinclair, his sister's party-girl best friend from college, he's not happy and wants her fired. Even worse than her partying past, he's attracted to her. Burned once by his gold-digging, city woman of an ex-wife, he has no interest in playing with fire.

Dogged by a past that won’t let her go, Jessica arrives at the ranch with a plan: excel as an office manager, stay away from the bulls, and no cowboys. Her father died when thrown from a bull when she was a kid, so avoiding them is key. Cowboys, well, they're just as dangerous as the bulls. Then there's Tyler Knight, part owner of the Double K ranch. This stubborn cowboy can ruin everything by sending her away before she can earn a single penny. Buying time with a proposal solves one problem but leads her straight into riskier territory, fighting an attraction to the bull-riding billionaire boss.


Can this city girl and cowboy survive the wildest ride of their lives?

Available from Amazon | All Other Retailers